Recently Dr. Catania went abroad on a conservation trip to dehorn wild white rhinoceros. Lori Space-Day (aka: Zoo Mama) had the opportunity to sit down with Dr. Gabby for an interview to learn more about the amazing opportunity. Continue reading to learn more!

Dr. Gabrielle Catania, D.V.M. of the Animal Hospital of Sussex County, in Augusta, recently returned from a trip to the Limpopo and Mpumalanga provinces of South Africa. While there she participated in a conservation medicine trip, spending her time at two different locations: Care for Wild, an orphanage and rehabilitation center for injured rhinos, and the Selati Game Reserve. Dr. Catania, (aka Dr. Gabby), found this amazing opportunity through Loop Abroad, (loopabroad.com), a group that provides an array of conservation style trips for veterinary students and professionals at different stages in their careers.

Dr. Gabby’s trip focused on conservation efforts taking place at these two facilities while also tying in the participants’ medical and husbandry skills. Southern black rhinoceroses are currently critically endangered, while southern white rhinoceroses are classified as near threatened. Rhinos have been illegally poached for their horns, one of the most sought after commodities on the wildlife black market. Rhino horns are used for a multitude of reasons ranging from jewelry, décor and most notably antiquated traditional medicine claims.

Dr. Gabby’s first stop was at the Care For Wild Orphanage and Rehabilitation Center, a renowned facility specializing in the care of southern black and white rhinos. Many of the facility’s residents are there as a direct result of poaching – whether their mothers were killed leaving behind orphaned babies or they were critically injured while being hunted for their horns. These mega-herbivores come from all over, frequently arriving by emergency helicopter! While at the orphanage, Dr. Catania took part in many aspects of the residents’ husbandry needs. The morning consisted of feeding the young rhino, often by bottle, and cleaning out bomas (paddock style enclosures), while the afternoon was full of learning. The evenings were spent with dinner feedings and drives around the facilities to check on the well being of the rhinos in the process of being re-wilded. 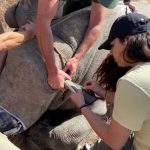 Dr. Gabby placing a catheter in a sedated southern white rhino to allow IV access during the dehorning procedure.

“Rhino calves roll in mud, similar to pigs here in the U.S.,” the young veterinarian chuckled, “and they have this cute high pitched calling sound that they make, especially when they are hungry.” Though her time at Care for Wild was short, she states that it was incredibly impactful. “The work this facility does is nothing short of awe inspiring. They are not only full time caretakers to this special species, but also pioneering a path in rhino conservation and management”.

The second stop on the trip was the Selati Game Reserve in Limpopo. Here Dr. Catania’s responsibilities were very different. The rhino within this reserve are all dehorned, part of a multi-faceted effort to deter poachers.

“ The process for finding and dehorning the rhinos was a combination of emotionally, exhilarating, and intense” says Dr. Gabby. The Loop Abroad group was accompanied by the Selati research team, a couple of wildly skilled pilots, and two or three local veterinarians (depending on the day) and their teams.

“These are some of the most amazing people I have ever even encountered” she gushed. “The doctors were not only downright brilliant but they were stellar teachers and really just so kind”. The rhinos were located by plane, darted by helicopter, then processed by Dr. Gabby and the ground team who had followed behind in open air trucks. When the rhinos were sedated enough to be approached, blindfolds were placed over their eyes. Ear plugs were placed to minimize any extra noises or sights that may possibly excite them. Once stable, catheters were placed, extra medications given and the team got to work. Data was collected on each specific rhino and when all was finished the rhinos were administered reversal drugs to wake them up. From there, it was on to the next one.

This process, while dramatic, is not detrimental to the animal. Even though the rhinos’ horns were believed to be used for protection, their greatest predator is greed. The removal of the horn itself, when done correctly, is painless and very similar to trimming a horse’s hooves as the two structures are made out of nearly identical material. Rhino horns and horse’s hooves behave the same as well. While horses need their feet trimmed more frequently, the rhinos on this reserve undergo dehorning about every 18-22 months. This is dependent upon different variables such as nursing and available nutrition contributing to the growth rate of their horns. The team obviously aimed to be efficient. Extreme care was taken at every point of the project to make sure the welfare of each rhino was their top priority. The team was able to successfully and safely dehorn over a dozen southern white and black rhino while Dr. Catania was there. Despite the team’s best efforts, their ton sized subjects often fell asleep in places that made reaching them an adventure in itself. Frequently the group found themselves deep in the bush, working around massive trees and even up against boulders.

“We learned how to be quick as a team- get in, do our work, and get out of there. The last place you want to be is in the line of a rhino in the process of waking up”.

The Loop Abroad team also had the experience to work with a select few Cape Buffalo which had been confined for disease testing just prior to the buffalo’s release to the greater reserve. The group of veterinary professionals was also lucky enough to work with a 25 year old elephant bull that was sedated in order to remove his radio tracking collar. Almost daily, the group was able to go on game drives (aka safaris) to view the other wildlife on the reserve. This included Kudus, Impala, Sables, Giraffes, Zebras, Lions and most excitingly for Dr. Gabby, African Painted Dogs. 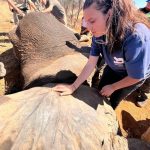 “I want people to realize that dehorning alone is not a silver bullet for the poaching crisis rhinos and many other species are currently facing. There are so many initiatives being taken, like increasing security in the form of rangers and anti-poaching units to getting involved with local communities to explain the importance of their native wildlife as well as provide opportunities for income and education so that they are less likely to be influenced by poaching groups. We don’t realize it here as much stateside, but conservationists worldwide have a huge mission on their hands. We have keystone species disappearing at an alarming rate globally, and there are actually a lot of things people can do, no matter where or who you are. Whether it be educating yourself, family or friends about what it means for a species to be considered endangered, supporting organizations and researchers working on the ground with these animals, or even taking a trip out to gain first hand exposure there is so much we can do to make an impact and keep the fight going.” states Dr. Catania passionately. After a week of early days out in the bush and late nights around the campfire, this is definitely not her last trip to South Africa.

Dr. Gabby has since returned from her trip and is back in the office taking appointments! To request an appointment for your pet, click here!

AAHA: The Animal Hospital of Sussex County is a certified hospital in the American Animal Hospital Association (AAHA). To achieve this distinction, our hospital has passed regular comprehensive inspections of our facilities, medical equipment, veterinary practice methods and management. If you are traveling or relocating anywhere, finding an AAHA hospital will ensure the best medical care for your pet. The AAHA is recognized as the world’s leading association of small animal practitioners.

AAFP: We are also a cat friendly practice, certified by the American Association of Feline Practitioners. This means that the Animal Hospital of Sussex County is specifically set up to decrease stress and provide a more calming environment for your cat. Our staff has also been trained in feline-friendly handling and understanding cat behavior in order to increase the quality of care for your cat.